“Geographic isolation is often interpreted as functional isolation, especially outside the scientific literature, but this interpretation is incorrect. Geographically isolated wetlands are not hydrologically, biogeochemically, or biologically isolated from other landscape elements or downstream waters.” (Cohen et al. 2016) 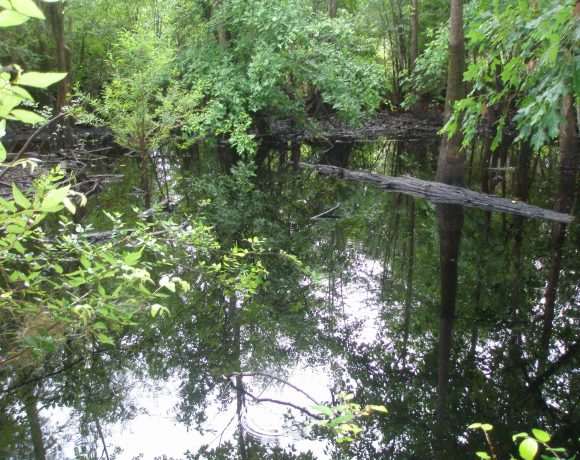 Geographically isolated wetlands appear to have no surface water connection to other water features.

The results of our investigations in North and South Carolina indicated that the study isolated wetlands were well connected to downgradient surface water via groundwater, though the nature of the connection and the ramifications of hydrologic modifications varied due to local variations in the underlying stratigraphy. Any activities that change the dynamics of the system will have a direct impact on upgradient wetlands and downgradient streams and non-isolated wetlands

Isolated wetlands were connected to nearby waterbodies

Monitoring of 83 groundwater wells from 2010 to 2012, three aquifer pumping tests, and water table contour maps clearly showed the 11 study isolated wetlands were hydrologically connected to nearby waterbodies that have surface connection to federally regulated streams. Hydrologic monitoring and drawdown data from aquifer pumping tests indicated that the isolated wetlands were hydraulically connected to the water table aquifer while water table contour maps and hydrologic monitoring showed groundwater flowed toward, and discharged into, downstream connected water bodies.

The combination of groundwater connection and water quality function showed a continuity between isolated wetlands and connected water bodies, indicating that isolated wetlands are an integral part of these hydrologic landscapes. It is qualitatively clear from GIS mapping and hundreds of site visits that the observed geomorphic conditions likely are widespread. The study area landscape is complex in terms of isolated wetland position relative to connected streams, soil characteristics, anthropogenic alteration, and isolated wetland condition, which suggest site specific subtleties influence these functions at a local scale.

Vegetation metrics that can be used to quantify plant community quality were developed for forested isolated wetlands. The results of this study also further validated and verified NCWAM as a useable rapid assessment tool.

A generalized linear model was used to analyze the relationship between six sets of vegetation IBIs (indices of biotic integrity) (forest, shrub, and emergent IBIs) and NCWAM ratings (overall and habitat function ratings). The results indicated that from one-third to three-quarters of the variation in the IBI(s) were accounted for by NCWAM ratings in the study area. These results also showed that NCWAM could successfully rate the function of isolated wetlands.

Unfortunately, metrics to quantify the quality of the biotic communities could not be developed due to unusually dry weather limiting amphibian and aquatic macroinvertebrate communities, but these were still sampled and assessed.

Amphibians and aquatic macroinvertebrates were sampled in 2011 and 2012. Uplands surrounding the isolated wetlands in the study ranged from agricultural lands to natural forest. Abnormally dry and hot climatic conditions in 2011 reduced the number of animals in the wetlands. Additionally, the absence of standing water (year-round at NC sites but seasonal at SC sites), farming in adjacent uplands, and acidic water limited use by amphibian and macroinvertebrate species. Twenty-three different amphibian taxa (Genus level) were collected at the isolated wetland sites, most of which were tolerant of variable environmental conditions (low dissolved oxygen and drying), and diversity at each site ranged from four to nine species. Macroinvertebrate diversity in the isolated wetlands was lower than that generally found in streams and permanent wetlands, most likely due to the seasonal presence/absence of standing water in many isolated wetlands. 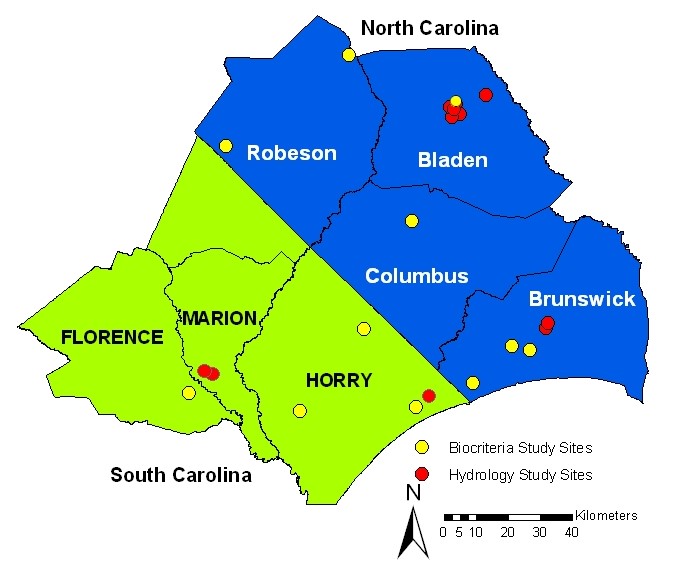 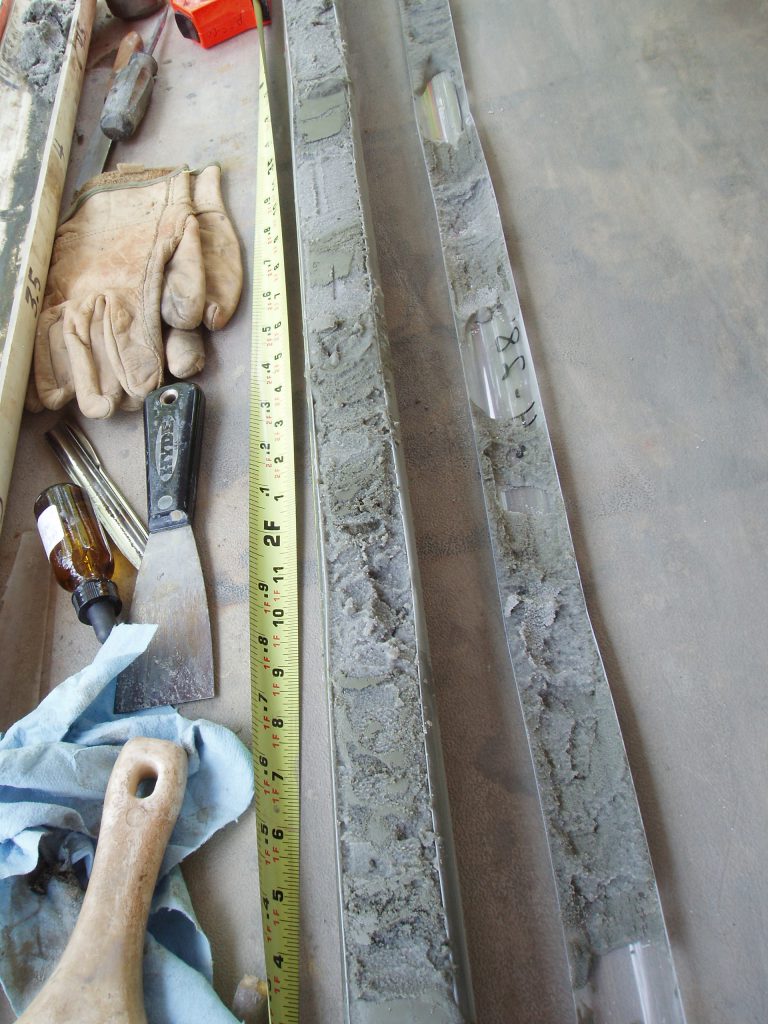 Soil cores were analyzed as part of the hydrologic assessment study 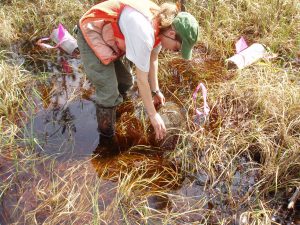 Scientists use traps to detect amphibians in isolated wetlands. 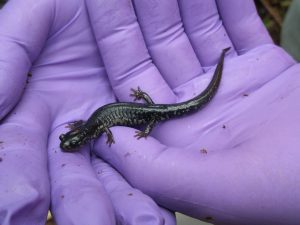 Amphibians can be good indicators of wetland health.

Assessment of Mitigation for Isolated Wetlands in North Carolina