You are here: Home / Spatial Relationship of Impact to Mitigation for Wetlands/Streams in North Carolina

“It appears that North Carolina’s system of impact permitting and mitigation approval has relocated aquatic resources from urban areas into more rural settings.”

Regulatory requirements for the location of compensatory wetland and stream mitigation have changed as scientific understanding of the ecological benefits of these projects has developed and as practitioners and regulators have learned from their experiences. Before 1990, there was a preference for mitigation sites located as close to the impact as possible, with the intent of offsetting negative effects on local water quality that resulted from the impact.

The 2008 rule published by the US Army Corps of Engineers (USACE) and the US Environmental Protection Agency (EPA) emphasized a watershed context to strategic site selection for compensatory mitigation projects. Eight-digit hydrologic unit codes (8-digit HUCs, also known as subbasins) describe watersheds of approximately 600 to 2,900 square miles (for those within and overlapping NC state boundaries), based on a drainage organizational system established by the US Geological Survey.

The 8-digit HUC continues to be the primary service area in North Carolina and many surrounding states, and two-thirds of compensatory mitigation for approved wetland and stream impacts is provided on an in-subbasin basis through mitigation banks or the state’s in-lieu fee program, NC Environmental Enhancement Program (now Division of Mitigation Services). This approach to compensatory mitigation generally facilitates larger mitigation projects than permit-specific on-site mitigation and is thought to provide greater ecological uplift than several smaller mitigation projects scattered across the landscape. In theory, this system allows mitigation to be placed where it will have the greatest benefit to the targeted local watershed.

This project added a spatial dimension to the impact and mitigation tracking databases maintained by NC Division of Water Resources to explore the landscape-scale relocation of stream, wetland and riparian buffer resources that may have occurred as a result of the state’s 401 Certification and riparian buffer protection programs. Impact and mitigation data sets were analyzed, using information for the five-year period from July 1, 2005 through June 30, 2010.

Based on the study results, it appears that North Carolina’s system of permitting impacts and mitigation approvals has relocated aquatic resources from urban areas into more rural settings. A general statewide trend of wetland resource relocation from urban to rural areas was observed. Most (67%) of the 8-digit HUCs in NC demonstrated lower percentages of wetland mitigation occurring in urban areas than of wetland impacts approved in urban areas from 2005 to 2010. Much of the wetland mitigation in the watersheds containing Greensboro, Winston-Salem and Wilmington appeared to occur around the metropolitan areas, rather than within them. 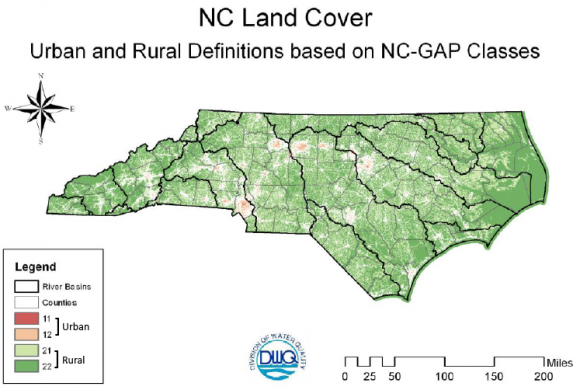 Some loss of local wetland function may have been replaced by stormwater best management practices required to be incorporated into the designs of residential and non-residential development projects in which land disturbance area and/or impervious surface cover exceeded regulatory thresholds. However, these systems were designed with an expectation of perpetual maintenance, while compensatory mitigation projects were expected to become self-sustaining, natural, preserved ecosystems over the long-term. Further, engineered stormwater treatment devices provide little in the way of stream and riparian buffer functional replacement.

As with wetlands, streams had a similar statewide trend of aquatic resource relocation from urban to rural areas. Sixty-four percent of the 8-digit HUCs in NC demonstrated lower percentages of stream mitigation initiated in urban areas than of stream impacts approved in urban areas. The Triad area around Greensboro and Winston-Salem demonstrated both higher and lower percentages of urban mitigation as compared with urban impacts, depending upon 8-digit HUC. The western part of the state, including the developing areas around Charlotte and Asheville, generally had higher percentages of mitigation than impacts in rural areas, indicating a potential shift from urban impacts to rural mitigation.

The statewide trend for riparian buffer mitigation and impacts was similar to that for wetlands, with an apparent shift of buffer resources from urban to rural areas. On a statewide basis, all three resource types (wetlands, streams, and buffers) demonstrated greater total amounts of impacts than for mitigation in urban areas, and greater proportions of mitigation than impacts in rural areas.

If water quality, wildlife habitat and other ecological services were enhanced on a watershed scale, then perhaps the results of this shift were net positives in terms of aquatic resource functions. However, there are likely aquatic function reductions occurring in developing areas. Further studies correlating spatial relocation with environmental metrics, such as trends in water quality measurements or biotic indices, may be useful in determining whether the landscape-scale relocation is an issue at local, regional and/or statewide levels. 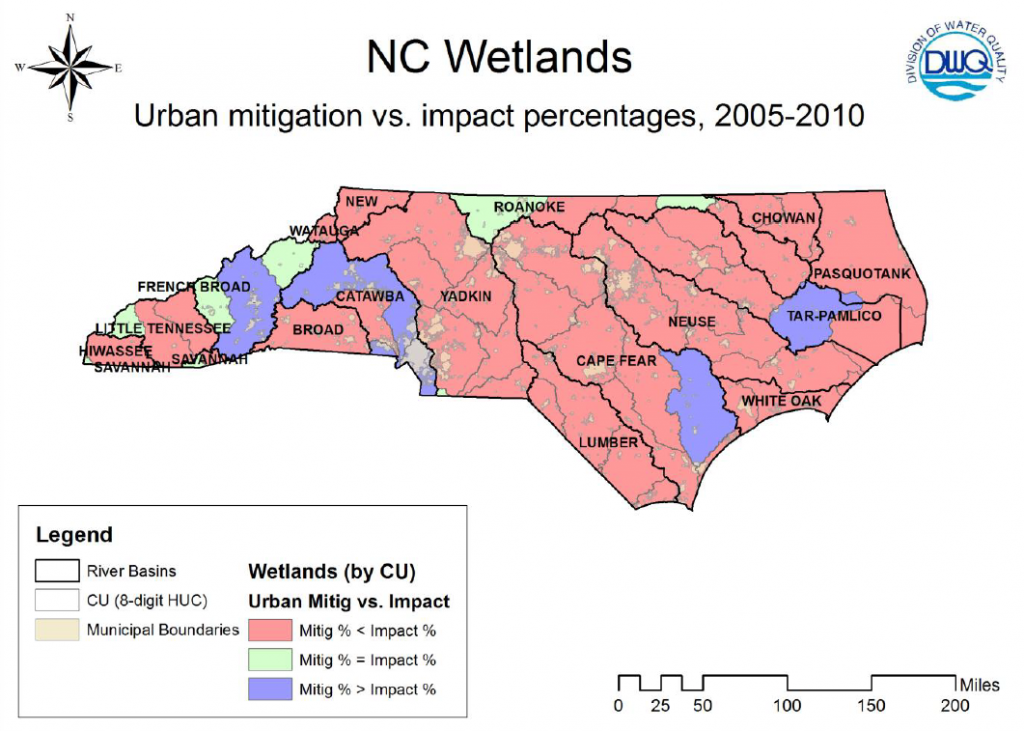 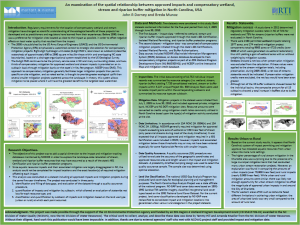 This work was presented at the 2016 Student Association of Wetlands Scientists of Duke University in poster form, which is available here.

A 2012 final report detailing this work is downloadable here.