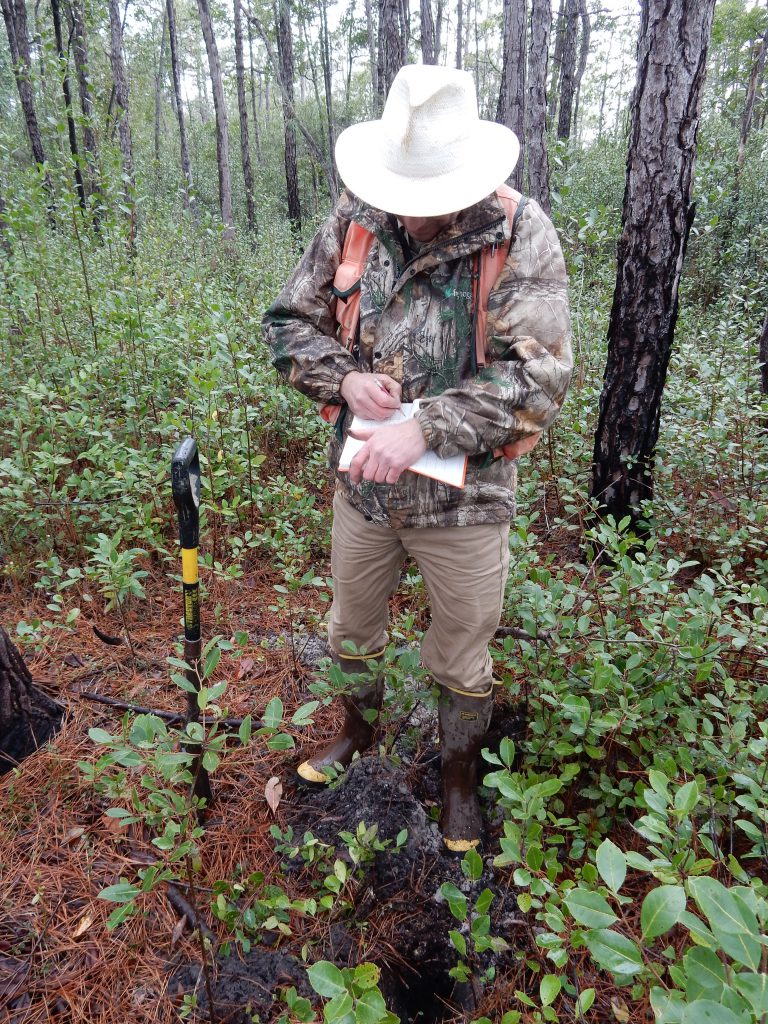 Development of the National Wetland Inventory (NWI) was begun by the US Fish and Wildlife Service in the 1970’s using the data sources, technologies, and wetland classification system available at that time. Mapping in North Carolina (NC) was primarily completed using 1980’s-era aerial imagery collected and since then, there have been very few updates. Limitations of the data set, in addition to the age of the data, include a relatively large (0.5 ac.) minimum mapping size, relatively coarse resolution of the source imagery, and inclusion of many features that do not meet the current common definition of “wetland”. However, it is the only widely available map of wetland locations and extent within NC and for much of the US, and so is widely used for purposes for which it was not designed.

The accuracy of NWI for NC has not been independently assessed for much of the state, which adds uncertainty to projects and management decisions that rely on NWI to support decision-making. This study was intended to fill that knowledge gap by comparing the current NWI spatial data to field delineations of wetland and non-wetland areas collected in 2001-2019.

Multiple accuracy metrics were calculated using the NWI and corresponding field-delineations. The odds ratio was used to represent total accuracy for all classifications (wetland and non-wetland), and was highest in the Blue Ridge; had a moderate value in the Piedmont, Southeastern Plains, and statewide; and was lowest in the Mid-Atlantic Coastal Plain. However, further reviews of the data suggested that the high value in the Blue Ridge was likely due to the NWI correctly identifying the few large wetlands in this area while missing many small wetlands, which was confirmed by very low odds ratios for smaller feature size classes. Since the odds ratio reflects correct identification of non-wetlands as well as wetlands, the odds ratios were also likely inflated due to the high prevalence of large non-wetlands in the Blue Ridge. When examined by feature size, odds ratios ranged from 0.1 – 1.4 for all feature size classes <1.0 ac., which indicates extremely poor accuracy.

Errors of commission and omission for the wetland class were represented by User’s Accuracy (UAWL) and Producer’s Accuracy (PAWL), respectively. Small wetlands (all size classes ≤1.0 ac.) had extremely high errors of omission statewide, as indicated by very low PAWL (8-29%), though errors of commission were low to moderate, as indicated by higher UAWL (68 – 85%).  Wetlands >1.0 ac. had somewhat high levels of omission and commission (PAWL = 52%, UAWL = 62%), and the similarity of these values suggest that NWI over- and under-predicts wetlands at roughly the same rate.

Results suggest that NWI is a largely unreliable data source for identification of smaller wetlands (<1.0 ac.) in NC. This leads to overall poor accuracy (specifically, high rates of omission for wetlands) in the central Piedmont and western Blue Ridge ecoregions, where wetlands are naturally much smaller. However, even in the eastern part of the state (Southeastern Plains and Mid-Atlantic Coastal Plain ecoregions), where wetlands tend to be much larger, NWI accuracy was still problematic in many areas, with almost all of the eastern Level IV ecoregions having UAWL and/or PAWL <75% (i.e., errors of commission and/or omission >25%), and several having UAWL and/or PAWL <50%.

While NWI can be a valuable data set when used for its intended purposes, the accuracy issues found for the NC data suggest it should be used with caution, particularly if smaller wetlands (<1.0 ac.) are of interest, or the area of interest is located in the central or western portion of the state where smaller wetlands are very common. Funding for more updated, accurate wetland mapping for the entire state of NC is sorely needed to provide government and the public with information needed to make sound management decisions.