You are here: Home / Field Evaluation of Restored Mitigation Wetlands in North Carolina 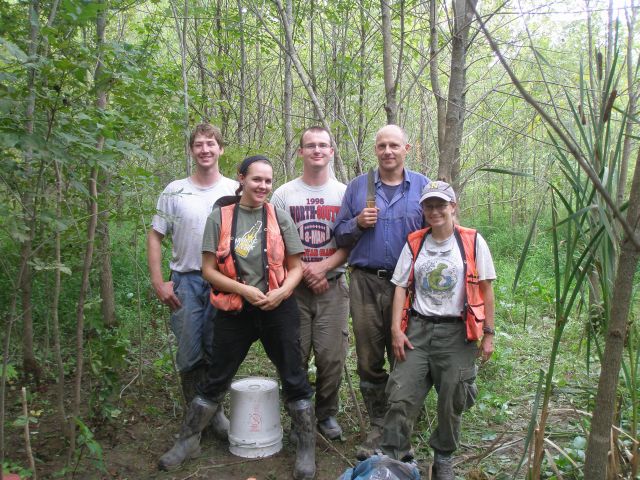 Restoring previously-drained wetlands is an important option for mitigating human-caused impacts to wetlands. The purpose of this study was to evaluate the ecological integrity of wetland compensatory mitigation projects in North Carolina, as a whole and within each of the three mitigation mechanisms in North Carolina (in-lieu fee program, mitigation bank, and permittee-responsible). Entities with permitted wetland impacts requiring mitigation can choose to purchase mitigation credits generated by the state in-lieu fee program or mitigation banks, or provide their own wetland mitigation by restoring wetlands on the impact site or on approved land nearby (permittee-responsible mitigation).

Thirty restored wetlands were assessed across North Carolina using USEPA National Wetland Condition Assessment protocols. In this study, assessments were made on mitigation sites that were 4+ years old and were released by the state and the US Army Corps of Engineers as successful after a 5-year monitoring period (the typical post-construction monitoring period in North Carolina). Sites were included in the study if they had been closed out after 5 years or, if not closed out yet, had been deemed successful in the most recent monitoring year for both hydrology and vegetation. Projects are closed out when the regulatory agencies (US Army Corps of Engineers and NC Dept. of Environmental Quality) decide that a site has met certain requirements for longer term success and no longer needs to be monitored. Vegetation success criteria were based on tree survivorship and success criteria for hydrology were based on number of days the water table was within a certain depth during the growing season. Once a site is closed out, mitigation credits are released and able to be sold.

Specific objectives for this study included 1) qualitatively describing the current state of wetland restoration in North Carolina across mitigation mechanisms, 2) comparing the results among floristic indices, ORAM, and NCWAM using correlation and constrained correspondence analysis ordination, and 3) determine the relationships between various environmental parameters and a GIS-based land disturbance index with the floristic indices, ORAM, and NCWAM scores. This was the first time that these various ecological assessments have been simultaneously applied to wetlands—natural or restored—across the state of North Carolina.

ORAM (Ohio Rapid Assessment Method) is a rapid wetland assessment focused more on habitat condition. ORAM scores are a summation of metrics that include wetland size, wetland buffers, hydrology, habitat, and vegetation. When we use this method in NC, a metric concerning Ohio-specific special wetlands is excluded. ORAM version 5.0 has been rigorously tested on natural, restored, and created wetlands across Ohio (Mack 2001). [Link to ORAM documents]

The LDI index is a way of reporting the degree of departure from natural undisturbed land around a site (Brown and Vivas 2005). Land use is analyzed at a certain buffer distance away from a site, to calculate area of each type of land use. Ratings are assigned to land uses and a mean rating (weighted by area) can be calculated to summarize the development intensity around the site.

In the 1990s, most NC compensatory mitigation was permittee-responsible, but these restoration sites had up to a 50% failure rate. In 1997, state legislation founded the “Wetlands Restoration Program” (WRP) – run under NC DENR (now NC DEQ). This wetland-oriented mitigation program gave permittees an alternative mitigation option (in-lieu fee), by offering mitigation credits for sale from the state. In 1999, the NC DOT started using WRP for some of their rapidly growing mitigation needs, but the situation was not working as efficiently and effectively as desired. State and federal review recommended that mitigation should be started years in advance for NCDOT projects, while allowing for continued watershed planning as established with WRP. This lead to the 2003 establishment of a Memorandum of Agreement between state and federal agencies and the creation of the NC Ecosystem Enhancement Program (EEP) now known as NC Division of Mitigation Services (DMS).

The majority of the 30 restored wetlands appeared to be stable, functional wetlands based on initial field inspections, immaturity of the vegetation structure of the forested sites notwithstanding. At a few sites, the planted trees displayed poor vigor, most likely due to site conditions being too dry for the planted taxa such as cypress (Taxodium spp.). This may imply that this restoration site was dryer than intended, or that the planting list was not appropriate for the designed soil saturation levels.

A majority of the restoration sites were rated as medium or higher quality by the VIBI, ORAM, and NCWAM assessments, and only two sites were rated as low quality with those three assessments. Floristic indices and rapid assessment scores were not significantly different among mitigation providers. However, permittee-responsible sites showed significantly worse LDI scores than in-lieu fee and mitigation bank sites. This is somewhat balanced by the fact that the location of the mitigation wetland is much closer to the site of impact when wetlands are restored on-site by the permittee. Overall, the correlations among the wetland assessments was low and not significant, with the exception being between the FAQWet index and ORAM and NCWAM rapid assessments. A shared emphasis on site hydrology likely explains the relationship among these three assessments.

All sites were dominated by vegetation with mean C-value ratings mid-range between tolerant and sensitive. It is unknown whether we can expect mean C values to increase over time at these restoration sites. However, obligate and facultative wet species richness values have been reported to significantly increase over time in some restored wetlands (Nedland et al. 2007).

Neither restored wetland size nor project age had a significant effect on wetland assessment scores. The project age likely did not have a significant effect because the sampled range (5 to 11 years) was either too narrow or did not capture the more rapid structural changes that occur in the first years post-construction. These results are similar to those found by Micacchian et al. in Ohio (2010).

Approximately 60% of the sites had soil horizons that appeared to be natural and fairly undisturbed.  Six sites had highly disturbed soils from either the construction process or previous land use. Two of the highly disturbed sites did not have apparent soil horizons, most likely because they were adjacent to large retail stores and involved moderate to large amounts of excavation. 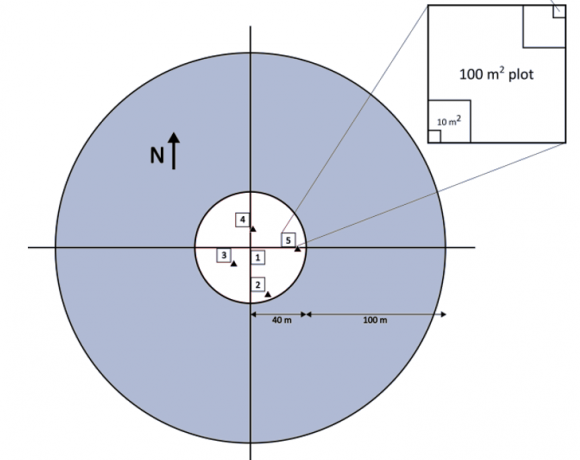 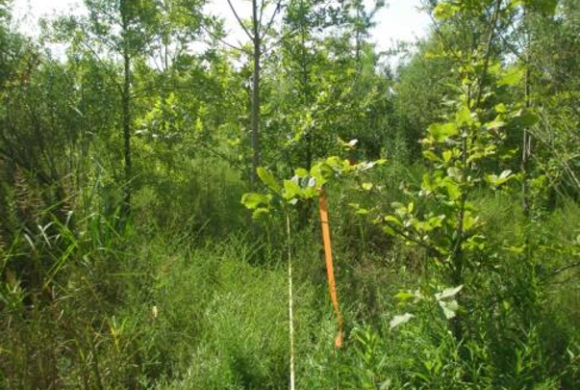 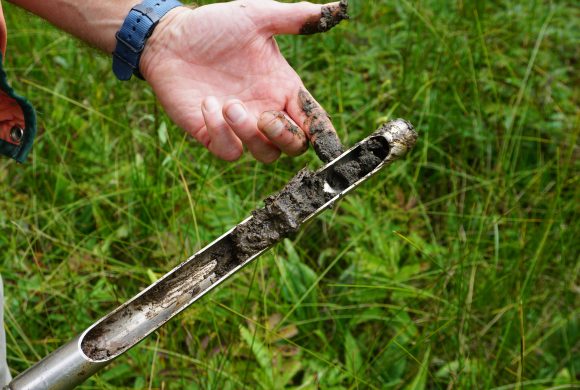 A soil probe is one way to study soils

Sixteen of the 30 mitigation projects included a stream channel that was located within 15 m of the assessment area boundary. Fifteen of these streams were restored in conjunction with the wetland. All the restored streams were in stable condition, though three of the 15 streams had noticeably low water levels, with one streambed covered in herbaceous wetland vegetation. The bankfull depth of these three restored streams appeared appropriate (i.e., not incised). Therefore, it did not appear that these three restored streams were adversely affecting wetland hydrology by acting as drainage ditches. Maps from the North Carolina Drought Management Advisory Council (http://www.ncdrought.org/archive/index.php) indicated no drought conditions at the time these three sites were surveyed. However, aerial imagery dating back to 1994 indicated no streams were previously located where the three restored streams were constructed. Also, each of the three streams flowed roughly parallel as opposed to obliquely toward the receiving river. The alignment of these stream restorations did not appear to coincide with the prevailing contours of the landscape, which likely accounted for the low stream water levels observed at these three sites.

A majority of the restoration sites were rated as medium or higher quality by the VIBI, ORAM, and NCWAM assessments, and only two sites were rated as low quality with those three assessments. Based on these similar rating distributions, one may conclude that assigning success or failure to a restored wetland can be performed adequately using a rapid assessment level of data collection, with the more resource-intensive detailed assessment reserved for questionable sites.

Note: This project was funded by the US Environmental Protection Agency with a grant to the Environmental Law Institute (ELI). ELI synthesized and compared results of this study to those collected in Ohio in 2011 using the same methods. The final report on the NC project results was sent to ELI, which issued a report with results from both states to the US EPA.